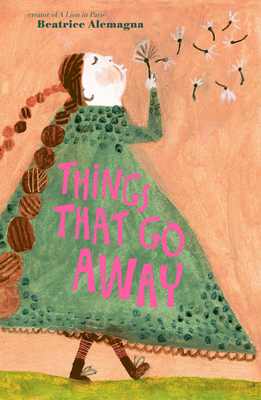 Things That Go Away

There are many things that go away: leaves fall, tears dry, music lasts only for a few moments, and bubbles pop, vanishing without a trace. Everything in life passes, moves on, or transforms—except one thing that never fades.

With her signature warmth, playfulness, and beautiful illustrations, Beatrice Alemagna reminds us that in a changing world, the love between parent and child remains constant.

Praise For Things That Go Away…

**STARRED REVIEW**
"This wise, creative book will be returned to with anticipation and shared frequently."
— School Library Journal

Beatrice Alemagna is the author and illustrator of over 30 books for children, including What is a Child? and A Lion in Paris. Her books have been translated into twelve languages, and four were nominated for the Astrid Lindgren Memorial Award, among many other awards. In 2017, her picture book On A Magical Do-Nothing Day was named a New York Times Best Illustrated Book of the Year and was recognized with a Gold Medal from the Society of Illustrators. She is from Bologna, Italy and lives in Paris, France.
Loading...
or support indie stores by buying on