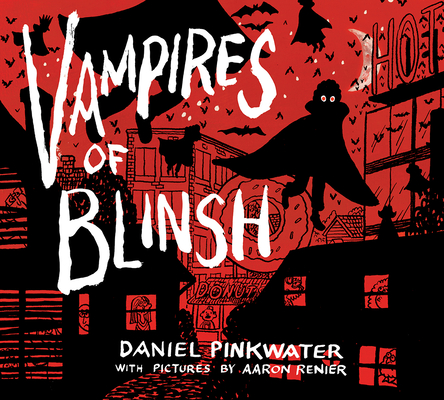 Praise For Vampires of Blinsh…

"By the last page, Blinsh feels like the real happiest place on Earth."
— Kirkus Reviews

"Come for the ghoulishness, stay for the literary equivalent of sitting between two expertly silly grown-ups as they devote their considerable talents to making readers giggle."
— Publishers Weekly

Daniel Pinkwater is, in brief, the author and sometimes illustrator of more than 100 (and counting) books, including his timeless The Big Orange Splot, which has sold more than one million copies. He is also an occasional commentator on National Public Radio’s All Things Considered and appears regularly on Weekend Edition Saturday, where he reviews exceptional kids’ books with host Scott Simon. Aaron Renier is the author of three graphic novels for younger readers: Spiral-Bound, The Unsinkable Walker Bean, and The Unsinkable Walker Bean and the Knights of the Waxing Moon. He received the Eisner Award in 2006 for Talent Deserving of Wider Recognition, and was an inaugural resident for the Sendak Fellowship in 2010. He teaches drawing and comics at universities in Chicago.
Loading...
or support indie stores by buying on