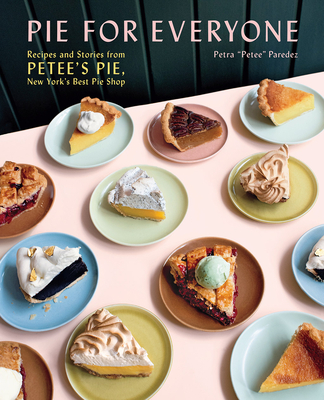 Petra (Petee) Paredez shares her personal repertoire of impeccable baking techniques that have made her pie shops, Petee’s Pie Company and Petee’s Café, New York darlings. At the heart of it all, the goal is simple—a tender, ﬂaky crust and perfectly balanced ﬁlling—and this cookbook leads the way with easy-to-follow, step-by-step guidance. A champion of locally sourced ingredients, Paredez features some of the best farms and producers in proﬁles throughout the book, inspiring us to seek out the very best ingredients for our pies wherever we may live. Filled with vibrant photography and recipes for just about every pie imaginable, from fruit and custard to cream and even savory, Pie for Everyone invites us to share in the magic and endless appeal of pie.

Praise For Pie for Everyone: Recipes and Stories from Petee's Pie, New York's Best Pie Shop…

‘“Pie for Everyone” means what it says: Armed with its recipes, you’ll be able to make pie for vegans, gluten avoiders, lard fanciers, whole-grain purists and butter-crust traditionalists. The last group will be especially happy. Petra Paredez, a wizard with a rolling pin who founded Petee's Pie Company in New York, has a method for sneaking more butter into pie dough than I thought possible. This produces the melting, tender deliciousness that those of us who admire Petee’s know well. There are small, improving deviations from standard recipes throughout the book, but tradition is the backbone of “Pie for Everyone.”’
— Pete Wells

Petra (Petee) Paredez is the head baker and co-owner of Petee’s Pie Company. Consistently ranked as one of New York City’s best pie shops, Petee’s Pie Company opened in 2014 on the Lower East Side. Petee’s Café, which offers cocktails, natural wines, and more savory pie options, opened in Brooklyn in 2018.