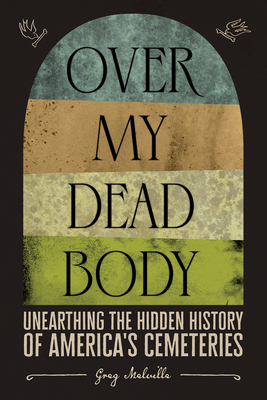 Over My Dead Body

A lively tour through the history of US cemeteries that explores how, where, and why we bury our dead

The summer before his senior year in college, Greg Melville worked at the cemetery in his hometown, and thanks to hour upon hour of pushing a mower over the grassy acres, he came to realize what a rich story the place told of his town and its history. Thus was born Melville’s lifelong curiosity with how, where, and why we bury and commemorate our dead.

Melville’s Over My Dead Body is a lively (pun intended) and wide-ranging history of cemeteries, places that have mirrored the passing eras in history but have also shaped it. Cemeteries have given birth to landscape architecture and famous parks, as well as influenced architectural styles. They’ve inspired and motivated some of our greatest poets and authors—Emerson, Whitman, Dickinson. They’ve been used as political tools to shift the country’s discourse and as important symbols of the United States' ambition and reach.

But they are changing and fading. Embalming and burial is incredibly toxic, and while cremations have just recently surpassed burials in popularity, they’re not great for the environment either. Over My Dead Body explores everything—history, sustainability, land use, and more—and what it really means to memorialize.


Praise For Over My Dead Body: Unearthing the Hidden History of America’s Cemeteries…

“If every graveyard is a library of compact life stories, this essential book is the grand, sweeping history of American burials: their humble beginnings, surprising (and often controversial) heyday, and questionable future. Greg Melville comes to the subject firsthand and writes with infectious enthusiasm, deep respect, and a healthy dose of wit. You'll dig it.”
— —MARK ADAMS, New York Times bestselling author of Turn Right at Machu Picchu

“Melville is an ideal guide, carrying a revealing lantern into both beautiful and disturbing corners of the nation’s undervalued graveyards. At the end of a glorious excursion, he leaves you with a deep appreciation of the rich heritage sleeping just under Americans’ feet. Captivating.”
— —DR. LINDSEY FITZHARRIS, bestselling author of The Butchering Art

“Greg Melville has written a wonderful book about a fascinating piece of Americana that has, for too long, needed a disinterment. Over My Dead Body is, at various times, haunting, thoughtful, and laugh-out-loud hilarious, and is so chock-full of informative ‘who knew?’ moments that the pages almost seem to turn themselves.”
— —MONTE BURKE, New York Times bestselling author of Saban and Lords of the Fly

Greg Melville has worked as an outdoor journalist and a former editor at Men’s Journal and Hearst magazines. He has strong connections with magazines and newspapers, and his writing has appeared in Outside, National Geographic Traveler, Men’s Health, and the Boston Globe Magazine. His work was also listed in The Best American Sportswriting 2017. He is a decorated veteran who served in Afghanistan and is in the Navy Reserve, where he is a Public Affairs Officer, with the rank of Lieutenant Commander. He has taught English and writing at the United States Naval Academy, where he was given the school’s instructor of the year award in 2019, and journalism at St. Michael’s College in Vermont. He lives with his wife and two kids in Delaware.
Loading...
or support indie stores by buying on