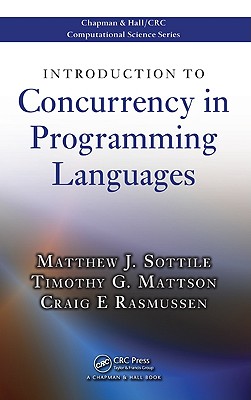 Exploring how concurrent programming can be assisted by language-level techniques, Introduction to Concurrency in Programming Languages presents high-level language techniques for dealing with concurrency in a general context. It provides an understanding of programming languages that offer concurrency features as part of the language definition.

The book supplies a conceptual framework for different aspects of parallel algorithm design and implementation. It first addresses the limitations of traditional programming techniques and models when dealing with concurrency. The book then explores the current state of the art in concurrent programming and describes high-level language constructs for concurrency. It also discusses the historical evolution of hardware, corresponding high-level techniques that were developed, and the connection to modern systems, such as multicore and manycore processors. The remainder of the text focuses on common high-level programming techniques and their application to a range of algorithms. The authors offer case studies on genetic algorithms, fractal generation, cellular automata, game logic for solving Sudoku puzzles, pipelined algorithms, and more.

Illustrating the effect of concurrency on programs written in familiar languages, this text focuses on novel language abstractions that truly bring concurrency into the language and aid analysis and compilation tools in generating efficient, correct programs. It also explains the complexity involved in taking advantage of concurrency with regard to program correctness and performance.

Matthew J. Sottile is a research associate and adjunct assistant professor in the Department of Computer and Information Sciences at the University of Oregon. He has a significant publication record in both high performance computing and scientific programming. Dr. Sottile is currently working on research in concurrent programming languages and parallel algorithms for signal and image processing in neuroscience and medical applications.Timothy G. Mattson is a principal engineer at Intel Corporation. Dr. Mattson's noteworthy projects include the world's first TFLOP computer, OpenMP, the first generally programmable TFLOP chip (Intel's 80 core research chip), OpenCL, and pioneering work on design patterns for parallel programming.Craig E Rasmussen is a staff member in the Advanced Computing Laboratory at Los Alamos National Laboratory (LANL). Along with extensive publications in computer science, space plasma, and medical physics, Dr. Rasmussen is the principal developer of PetaVision, a massively parallel, spiking neuron model of visual cortex that ran at 1.14 Petaflops on LANL's Roadrunner computer in 2008.
Loading...
or support indie stores by buying on