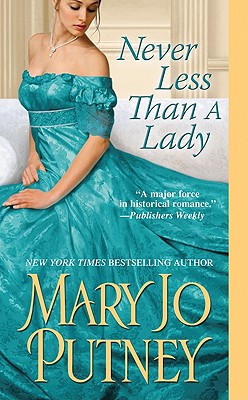 New York Times bestselling author Mary Jo Putney continues her stunning Lost Lords series with this stirring, sensual story of a rebellious nobleman drawn to a lovely widow with a shocking past.
As the sole remaining heir to the Earl of Daventry, Alexander Randall knows his duty: find a wife and sire a son of his own. The perfect bride for a man in his position would be a biddable young girl of good breeding. But the woman who haunts his imagination is Julia Bancroft--a village midwife with a dark secret that thrusts her into Randall's protection.
Within the space of a day, Julia has been abducted by her first husband's cronies, rescued, and proposed to by a man she scarcely knows. Stranger still is her urge to say yes. A union with Alexander Randall could benefit them both, but Julia doubts she can ever trust her heart again, or the fervent desire Randall ignites. Yet perhaps only a Lost Lord can show a woman like Julia everything a true marriage can be. . .
Praise for Loving a Lost Lord
"Intoxicating, romantic and utterly ravishing. . ." --Eloisa James
"Entrancing characters and a superb plotline. . ." --Publishers Weekly, starred review
"Will leave readers smiling, breathless, and anxiously awaiting the next adventure. . ." --Library Journal, starred review.