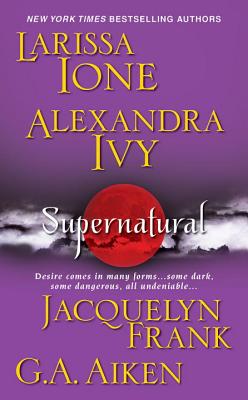 In this tantalizing collection, four New York Times bestselling authors invite you into the alluring worlds they've created in the Demonica, Guardians of Eternity, Nightwalkers, and Dragon Kin series. Each mesmerizing page will leave you craving more. . .

When a wave of violence forces shapeshifter Vladlena to go undercover, her first stop is a haven of vice--with a dangerously sexy vamp in charge. Both Vladlena and Nathan are hiding something, but they can't conceal the lust that simmers between them . . .

After being held captive by one vampire for four centuries, Kata had no intention of taking another one to the underworld with her. Yet even in the pits of hell, there's no ignoring the intoxicating desire awakened by his touch. . .

Kane knows Corrine was meant to be his. . . just as he knows that truly possessing the lovely human is forbidden. But on the night of the Samhain moon, the beast in every demon is stronger than reason, and Kane's hunger is more powerful than any punishment. . .

Escorting the highborn Bram through deadly Sand Dragon territory will try Ghleanna's patience. . . and her resolve. For Bram is determined to enhance the journey with a seduction no female could resist. . .

Jacquelyn Frank is the New York Times bestselling author of the World of Nightwalkers series, the Shadowdwellers novels (Ecstasy, Rapture, and Pleasure), the Gatherers series, and the Three Worlds series (including Seduce Me in Dreams and Seduce Me in Flames). She lives in North Carolina. Visit Jacquelyn at jacquelynfrank.com.

Originally from Long Island, New York Times bestselling author G.A. Aiken has resigned herself to West Coast living, which involves healthy food, mostly sunny days, and lots of guys not wearing shirts when they really should be. Writing as Shelly Laurenston, she is also the creator of the wickedly funny Pride series for Brava. For more info about G.A. Aiken’s dangerously and arrogantly sexy dragons go to www.gaaiken.com.
or
Buy Here
Copyright © 2020 American Booksellers Association