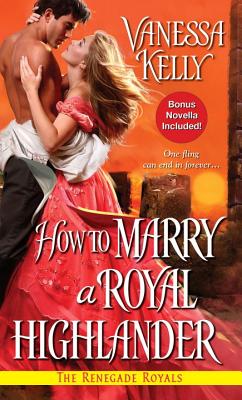 How to Marry a Royal Highlander (The Renegade Royals #4)

Illegitimate yet thoroughly irresistible, the Renegade Royals are leaving behind their careers as daring spies for the greatest adventure of all…

At sixteen, Alasdair Gilbride, heir to a Scottish earldom, fled the Highlands and an arranged betrothal. Ten years later, Alasdair must travel home to face his responsibilities. It’s a task that would be much easier without the distracting presence of the most enticing woman he’s ever met…

After one escapade too many, Eden Whitney has been snubbed by the ton. The solution: rusticating in the Scottish wilderness, miles from all temptation. Except, of course, for brawny, charming Alasdair. The man is so exasperating she’d likely kill him before they reach the border—if someone else weren’t trying to do just that. Now Eden and Alasdair are plunging into a scandalous affair with his life and her reputation at stake—and their hearts already irreparably lost…

"Will definitely resonate with fans of Mary Jo Putney and Joanne Bourne."
--Booklist

Vanessa Kelly is the award-winning and USA Today bestselling author of The Improper Princesses series, the Clan Kendrick, The Renegade Royals and The Stanton Family series, in addition to other historical romances. Named by Booklist as one of the “Stars of Historical Romance,”  her books have been translated into nine languages and published internationally. In graduate school, Vanessa specialized in the study of eighteenth-century British fiction and is known for developing vibrant Regency settings, appealing characters, and witty story lines that captivate readers. She lives with her husband in Ottawa. Visit her online at www.vanessakellyauthor.com or join the Clan Kendrick Facebook Group at www.facebook.com/groups/ClanKendrick.
Loading...
or
Not Currently Available for Direct Purchase