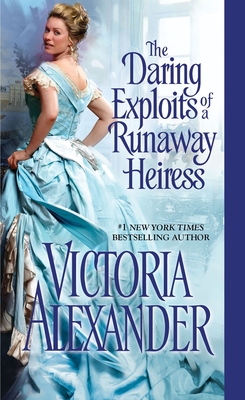 The Daring Exploits of a Runaway Heiress (Millworth Manor #5)

To Do:
Swim naked in the moonlight
Play in a high stakes card game
Ride an elephant
Be painted sans clothing.
Take a lover. . .

Lucy Merryweather has inherited a fortune--and her great-aunt's list of unfulfilled wishes. What better way to honor her memory than by accomplishing as many of them as possible? And with Lucy's family an ocean away in New York, nothing stands in her way--if one ignores the private investigator hired to spy on her.

Yet Cameron Effington is infuriatingly difficult to ignore. . .

As a reporter, Cameron is always looking for a good story. An American heiress running rampant between Millworth Manor and Mayfair is the perfect subject. Not to mention captivating. And extremely kissable. And if Lucy believes he's a detective? Well, the truth should never get in the way of a good story--or hinder delicious, impetuous passion. . .

"Sparkling dialogue and endearing characters make this an enthralling read." --Sabrina Jeffries on The Scandalous Adventures of the Sister of the Bride

New York Times bestselling author Victoria Alexander was an award-winning television reporter until she discovered fiction was much more fun than real life. She turned to writing full time and has never looked back. Victoria grew up traveling the country as an Air Force brat and is now settled in a very old house in Omaha, Nebraska, with her husband, two allegedly grown children and two bearded collies. She firmly believes housework is a four-letter word, there are no calories in anything eaten standing up, procrastination is an art form, and it's never too soon to panic.
Loading...
or
Not Currently Available for Direct Purchase