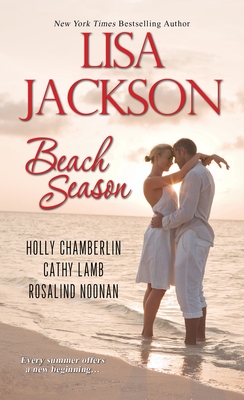 The Brass Ring by Lisa Jackson

It's a beautiful June day, perfect for a wedding--until Shawna learns that her fiancé, Parker, has been involved in a car crash. Though his injuries heal, his memories of her are gone. Yet Shawna won't stop reaching to reclaim the love they once shared. . .

June MacKenzie is done--with her high-pressure legal career, her difficult soon-to-be-ex, and the stress of city living. In her studio on the Oregon coast, she creates beautiful lace wedding dresses, with no intention of ever wearing one again herself. Then songwriter Reece rents the house next door, and sets out to change her mind. . .

Thea Foss is putting a bad marriage behind her in the pretty vacation town of Ogunquit, Maine. What's past is past. . ..Until her first love wanders into the local diner, reminding Thea of the person she once was, and the life it's not too late to claim. . .

Jane Doyle needs to get out of New York--the farther the better. She's headed toward Florida, but thanks to a storm along North Carolina's Outer Banks, she finds herself stranded in a beautiful, remote town that soon feels a lot like home. And thanks to the local sheriff, she finds herself staying longer than she planned--and feeling less lost at sea than ever. . .

Cathy Lamb is the bestselling author of twelve novels, including The Man She Married, No Place I’d Rather Be, What I Remember Most, The Last Time I Was Me, Henry’s Sisters and Julia’s Chocolates. She lives with her family in Oregon and can be found online at cathylamb.org.

Holly Chamberlin is the bestselling author of over fifteen novels including Summer Friends, Seashell Season, The Family Beach House and One Week in December. Born and raised in New York City, she now lives in a restored mid-nineteenth century brick townhouse in Portland, Maine with her husband and a very athletic, beautiful and intelligent cat named Betty. Please visit her online at www.HollyChamberlin.com.

Rosalind Noonan is a New York Times bestselling fiction author and graduate of Wagner College. She lives with her family in the Pacific Northwest, where she writes in the shade of some towering two-hundred-year-old Douglas fir trees.
Loading...
or
Not Currently Available for Direct Purchase