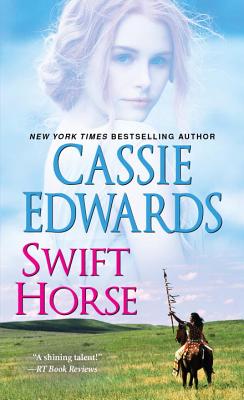 After witnessing the brutal murder of her parents at the hands of a savage, one-eyed warrior, Marsha Eveland swore she'd never forgive his kind. But then her brother announces his plans to marry Soft Wind, the undeniably beautiful sister of the Creek chief Swift Horse. Even if Marsha can forgive what feels like her brother’s betrayal, the past isn’t so easily left behind. It may be fear that forces Marsha to seek Swift Horse’s protection, but it’s an even stronger, untamed feeling that keeps her near him. Wilder still is her growing desire to ride alongside his passionate spirit—into the unknown country of her fearless heart . . .

Cassie Edwards began writing romances in 1982 and went on to sell more than 10 million copies of over 100 novels, featuring the peoples and customs of different Native American tribes. As a winner of the RT Book Reviews Lifetime Achievement Award and Reviewer’s Choice Award, and one of the writers who helped to establish the popularity of the historical romance genre, she is known for her heartwarming and deeply emotional tales.
Loading...
or support indie stores by buying on
(This book is on backorder)