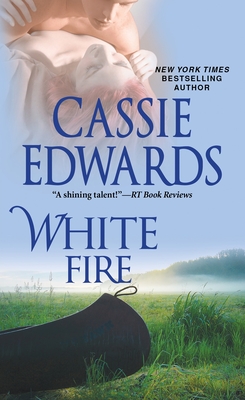 A forbidden love, a lifelong passion, a destiny that won’t be denied…

Known as Flame for her fiery red hair, not to mention her temperament, beautiful Reshelle Russell wants only one man, the one she can’t have—or so she is told. But since childhood, Flame has known that the proud Chippewa warrior, White Fire, is meant for her. Now a grown woman, she has embarked on her quest for him, in defiance of her father, an elite army commander.

Imprisoned for three years by an enemy tribe, White Fire has returned only to discover that his wife is dead and his young son has been taken by a wealthy white couple. It seems nothing can penetrate his cold, embittered heart, much less heal it—until he lays eyes on Flame once more. And soon it is clear that together they can fight to regain all he has lost, amid a passion that was destined to last for a lifetime…

Cassie Edwards began writing romances in 1982 and went on to sell more than 10 million copies of over 100 novels, featuring the peoples and customs of different Native American tribes. As a winner of the RT Book Reviews Lifetime Achievement Award and Reviewer’s Choice Award, and one of the writers who helped to establish the popularity of the historical romance genre, she is known for her heartwarming and deeply emotional tales.
Loading...
or
Not Currently Available for Direct Purchase