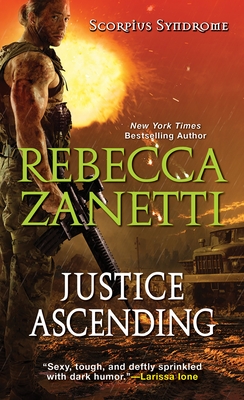 Before surviving the Scorpius bacterium, Tace Justice was a good ole Texas cowboy who served his country and loved his mama. After Scorpius, the world became dark, dangerous, and deadly—and so did he. The Vanguard medic is stronger, faster, and smarter than before, but he’s lost the line between right and wrong. His passion is absolute, and when he focuses it on one woman, there’s no turning back for either of them…

Sami Steel has been fighting to survive right alongside Tace, convincing the Vanguard soldiers she’s one of them. In truth, Sami is a former hacker turned government agent who worked at The Bunker, where scientists stored both contaminants and cures. Only she knows the location, and she’s not telling. Yet when sexual fire explodes between her and Tace, she’ll face even that hell again to save him.

Rebecca Zanetti is the New York Times  and USA Today bestselling author of over forty romantic suspense, dark paranormal, and contemporary romances, many of which have also appeared on the Amazon, Barnes and Noble, and iBooks bestseller lists. She is a two-time RT Reviewers Choice Award winner, the recipient of the RWA Daphne du Maurier Award, a ﬁve-time Daphne du Maurier Award ﬁnalist, a PRISM Award winner, and a two-time PRISM Award ﬁnalist. Nearly a dozen of her novels have been selected as Amazon Best Romances of the Month, including Lethal Lies and Mercury Striking, which were also Amazon Best Books of the Year. Zanetti has worked as an art curator, Senate aide, lawyer, college professor, and a hearing examiner—only to culminate it all in stories about alpha males and the women who claim them. Please visit her online at RebeccaZanetti.com.
Loading...
or support indie stores by buying on
(This book is on backorder)