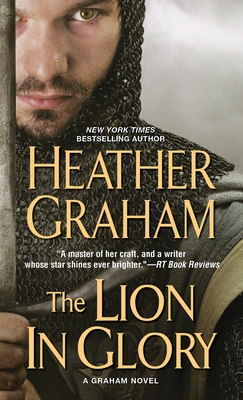 The Lion In Glory (A Graham Novel #5) (Mass Market)

"A master of her craft, and a writer whose star shines ever brighter." --RT Book Reviews

The tides of war have turned for the valiant Scots led by King Robert the Bruce, and they boldly reclaim lands still ruled by the English. When Jamie Graham comes to seize Hamstead Heath, he has no need for a hostage--not even one as beautiful and spirited as Christina, the manor's chatelaine. Yet she insists that he abduct her. Though he is certain this confounding woman is trying to play him for a fool, Jamie is determined to claim the sweet temptation she offers...

Christina has but one goal--to free her brother from the fortress of the new English king who has accused her family of treason. Her growing love for her unwilling captor is both unexpected and thrilling, yet it must not deter her from her mission--to master the art of jousting, win a tournament in disguise, and secure her brother's release. She cannot foresee the twist of fate that will threaten all she holds dear: her life, her lands...and the man who has captured her heart.

New York Times and USA Today bestselling author Heather Graham has written over one hundred novels and novellas and is a founding member of the Florida Romance Writers chapter of RWA. She has been published in approximately twenty languages, and has been honored with awards from Georgia Romance Writers, Affaire de Coeur, Romantic Times, and more. She has had books selected for the Doubleday Book Club and the Literary Guild, and has been quoted, interviewed, or featured in such publications as The Nation, Redbook, People, and USA Today, and appeared on many newscasts including local television and Entertainment Tonight.
or
Not Currently Available for Direct Purchase
Copyright © 2020 American Booksellers Association