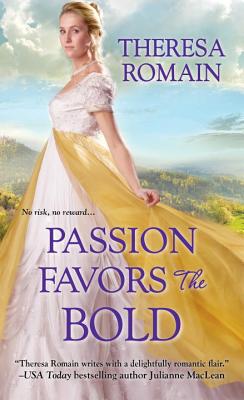 DESPERATE MEASURES
Georgette Frost’s time is almost up. On her twenty-first birthday, the protections outlined in her late parents’ will are set to expire. With prospects for employment or marriage unfavorable at best, she decides to leave London and join her brother, Benedict, on a treasure hunt for gold sovereigns stolen from the Royal Mint.

DANGEROUS LIAISONS
Lord Hugo Starling has always felt protective of his friend Benedict’s sister, Georgette. So when he discovers her dressed in ragged boy’s clothes, about to board a coach for parts unknown, he feels duty bound to join her search. But mystery piles upon mystery as they cross England together, not least of which is the confounded attraction between them. As Georgette leads him to a reward he never expected, Hugo realizes he’s embarked upon the adventure of a lifetime…

Historical romance author Theresa Romain pursued an impractical education that allowed her to read everything she could get her hands on. She then worked for universities and libraries, where she got to read even more. Eventually she started writing, too. She lives with her family in the Midwest. Please visit her at theresaromain.com.
Loading...
or
Not Currently Available for Direct Purchase