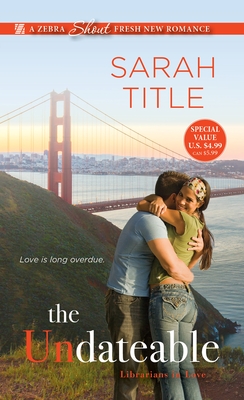 The Undateable (Librarians in Love #1)

One San Francisco librarian would rather check out a good romance than dare to experience it herself. Luckily, her own next chapter is full of surprises…

Melissa “Bernie” Bernard isn’t familiar with fame. After all, she works at a college library with hardly any visitors. But when a video of a marriage proposal in her stacks goes viral, it’s not the bride and groom who capture the Internet’s attention. It’s Bernie—caught rolling her eyes. Now, just as she’s ready to go into hiding and permanently bury her nose in a book, a handsome reporter appears with a proposal of his own…

If Colin Rodriguez doesn’t do something big to attract new readers, his boss will hire someone else to dole out dating advice. Determined to prove he’s an expert at romance—despite his own pitiful track record—he pitches a story: He will find dates for the undateable. Specifically, for the
now-infamous, love‑hating librarian at Richmond College.

Even though Bernie doesn’t believe in happily-ever-afters, she’s not one to resist a good challenge. Yet with one disastrous date after another, she’s ready to give up. Until Colin proves he’ll do anything to find her the perfect match—even if it means putting himself up for the role…

“Sexy and made me laugh!” —Smexy Books

“A fast-paced read that provided just as many smiles from the humor as it did sizzles from the romance.” —The Book Divas Reads

“Quite a sexy book.”  —USAToday.com

Sarah Title has worked as a barista, a secretary, a furniture painter, and once managed a team of giant walking beans. She currently leads a much more normal life as a mild-mannered(ish) librarian in North Carolina. She is the author of the Southern Comfort series, set in small-town Kentucky; Kentucky Home, her first novel, was published in 2013.  She comments irregularly and insightfully on her blog, Title, Author, at www.sarahtitle.com, and if you like pictures of elderly poodles, follow her on Instagram (@titleauthor), Twitter (@titleauthor), and Facebook (facebook.com/sarahtitlebooks).
Loading...
or
Not Currently Available for Direct Purchase