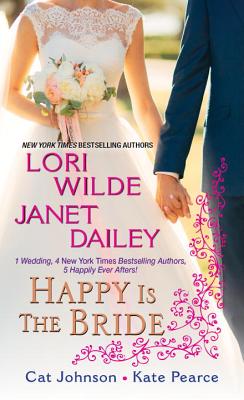 Happy Is the Bride

Stirring up all the romance and excitement a bride could hope for—plus a healthy dose of unforeseen shenanigans—four of today’s most dazzling bestselling authors deliver the wedding of the year, where there’s something—and someone—for everyone. . .

Opposites attract when a wealthy cattleman and a penniless artist decide to get hitched at a Texas dude ranch in tornado country—and the whirlwind festivities are as filled with surprises as their love . . . especially when the guest list includes: one pretty party crasher on a mission, a sheriff known as the One Night Stand King, and a workaholic event planner who definitely did not plan to fall for a laid back cowboy. Toss in a shocking behind-the-scenes bet, a fateful power outage, and a Man of Honor and a Best Woman determined to see the worst in each other (between hot kisses), plus thrilling lessons in love at first—and second—sight, and the celebrations are going to go all night long!

New York Times and USA Today bestselling author Lori Wilde is a fifth generation Texan, a registered nurse with a specialty in forensics, and a certified yoga instructor. She’s written over seventy-five books, most of them set in her home state. She loves creating stories of stalwart cowboys and heart-melting military heroes to share with her readers.

Janet Dailey’s first book was published in 1976. Since then she has written more than 100 novels and become one of the top-selling female authors in the world, with 300 million copies of her books sold in nineteen languages in ninety-eight countries. She is known for her strong, decisive characters, her extraordinary ability to recreate a time and a place, and her unerring courage to confront important, controversial issues in her stories. You can learn more about Janet Dailey and her books at JanetDailey.com.

A New York Times and USA Today bestselling author, Cat Johnson writes contemporary romance in genres including military and western. Known for her unique marketing and research techniques, she has sponsored pro bull riders, owns a collection of camouflage and western footwear for book signings, and a fair number of her consultants wear combat or cowboy boots for a living. For more visit CatJohnson.net.

New York Times and USA Today bestselling author Kate Pearce was born in England in the middle of a large family of girls and quickly found that her imagination was far more interesting than real life. After acquiring a Master’s degree in history, and barely escaping from the British Civil Service alive, she moved to California and then to Hawaii with her kids and husband and set about reinventing herself as a romance writer. You can find Kate at her website at www.katepearce.com, on Facebook as Kate Pearce, and on Twitter as Kate4queen.
Loading...
or
Not Currently Available for Direct Purchase