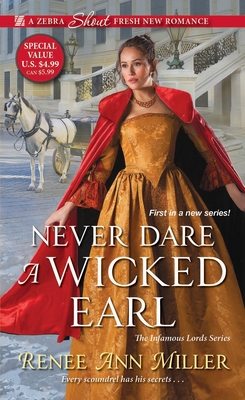 They are the infamous lords, unrepentant rogues whose bad behavior makes for good gossip among the ton. But these sexy scoundrels have stories no one knows. And it takes a special touch to reveal the true hearts behind their devilish disguises . . .

Known as a brazen philanderer, Hayden Milton, Earl of Westfield, is almost done in by a vengeful mistress who aims a gun at a rather essential part of his anatomy—but ends up wounding his thigh instead. Recuperating in his London townhouse, Hayden is confronted by his new medical attendant. Sophia Camden intrigues him, for behind her starched uniform is an enticing beauty better suited for bedding than dispensing salves and changing bandages.

Unshaken by his arrogance, not to mention impropriety, Sophia offers Hayden a dare: allow her ten days to prove her competency. If she resigns in exasperation like her two predecessors, she will be beholden to this wicked seducer. As a battle of wills begins, Sophia finds herself distracted by the earl’s muscular physique . . . and discovers that the man within longs only for a second chance to love.

Praise For Never Dare a Wicked Earl (The Infamous Lords #1)…

“Miller debuts with a highly enjoyable start to her Infamous Lords series that beautifully combines humor and poignancy within a battle of wills and wiles. The dialogue moves the well-crafted plot along as the three dimensional characters steal readers’ hearts. From a bad boy hero, to a feisty heroine, an adorable child, and a loveable St. Bernard, this lively tale will tug at your heartstrings. Miller’s talents shine and will keep readers completely engaged.” —RT Book Reviews, 4 Stars

Renee Ann Miller writes sexy historical romances. She is a 2015 and 2016 finalist in the prestigious Golden Heart Contest® from Romance Writers of America®. Renee penned her first book at the tender age of seven and even drew the impressive stick figures—though clearly those characters weren’t as spicy as the ones she writes now.

Renee loves romantic stories, excessive amounts of chocolate, and gardening. She lives in the Northeast with her wonderful husband. Though she grew up in a household of hockey fans, her favorite sport is football. Renee swears it has nothing to do with watching muscled guys running around, but that’s debatable. You can find out more about Renee and the stories she’s working on at www.Reneeannmiller.com and connect with her at Twitter @reneeannmiller.
Loading...
or
Not Currently Available for Direct Purchase