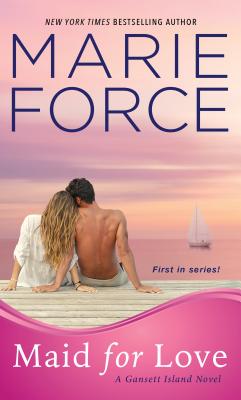 Single mom Maddie Chester is determined to leave her hometown of Gansett Island. For visitors, it’s a place for fun in the sun, but for Maddie it holds only bad memories and ugly rumors. Yet no sooner than she’s decided to leave Gansett behind, she’s knocked off her bike en route to her housekeeping job at McCarthy’s Gansett Island Hotel—by none other than Gansett’s “favorite son,” Mac McCarthy.

Mac has returned to the Rhode Island beach town to help his father prepare to sell the family marina—and he has no intention of sticking around a minute longer than necessary. But when he realizes he’s badly injured Maddie, he knows he has to do the right thing. When Mac decides to help her heal and care for her young son, he discovers he just may be “maid” for love . . .

Praise for Marie Force and her novels

“With the McCarthys of Gansett Island, Marie Force makes you believe in the power of true love and happily ever after. Over and over again.”
—Carly Phillips, New York Times bestselling author of the Serendipity series

“Force excels at creating characters readers can identify with and care about.”
—Booklist

Marie Force is the New York Times bestselling author of more than 50 contemporary romances, including the Gansett Island Series and the Fatal Series from Harlequin Books. In addition, she is the author of the Butler,Vermont Series, the Green Mountain Series and the erotic romance Quantum Series. All together, her books have sold 6 million copies worldwide. Her goals in life are simple—to finish raising two happy, healthy, productive young adults, to keep writing books for as long as she possibly can, and to never be on a flight that makes the news. Please visit her online at marieforce.com.
Loading...
or support indie stores by buying on
(This book is on backorder)