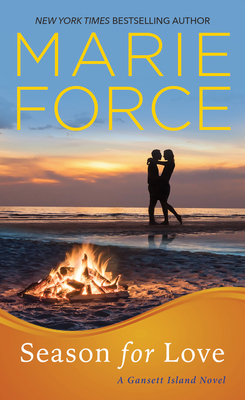 His idea of permanence is the VW van that takes him from one gig to the next . . .

Owen Lawry has made a living as a traveling musician and enjoys his footloose and fancy free lifestyle. But since meeting Laura McCarthy and helping her land a job at his grandparents’ hotel on Gansett Island, Owen has decided there’s something to be said for a roof over his head—and a warm, sexy woman in his bed.

Laura, a newlywed who discovered that her husband never quit dating, came to Gansett for her cousin’s wedding. She didn’t plan to stay—until she met Owen, and took on the renovations at the dilapidated Sand & Surf Hotel. Owen and Laura's attraction simmers over the coming months—but as they take baby steps toward love, their growing bond is tested when Laura’s estranged husband refuses to grant her a divorce. As summer turns to autumn, will they find a way to keep the fire burning in their hearts, even as a chill fills the air? . . .
Praise for Marie Force and her novels

“You’ll want to stay on Gansett Island too!”
—USAToday.com

“Force excels at creating characters readers can identify with and care about.”
—Booklist

Marie Force is the New York Times bestselling author of 70 contemporary romances, including the Gansett Island Series and the Fatal Series from Harlequin Books. In addition, she is the author of the Butler, Vermont Series, the Green Mountain Series and the erotic romance Quantum Series. Her new historical romance in the Gilded Series with Kensington Books, Duchess by Deception, also debuted in 2019. Her books have sold more than 7 million copies worldwide. Her goals in life are simple—to finish raising two happy, healthy, productive young adults, to keep writing books for as long as she possibly can, and to never be on a flight that makes the news. Please visit her online at marieforce.com.
Loading...
or
Not Currently Available for Direct Purchase