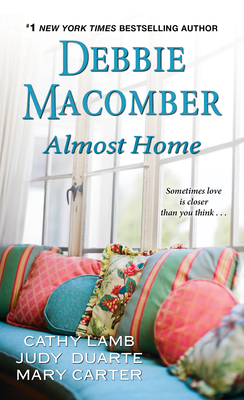 Old flames reignite and new passions burn when lovers follow their hearts back to the place they once called home . . .

“WHALE ISLAND” by Cathy Lamb
Family secrets and imposing friends are making Chalese feel like an outsider in her very own home on beautiful Whale Island.  But it’s only when a shocking revelation makes her feel truly lost that she opens her heart to the possibilities the past offers—including a chance at love with the last man she expected . . .

“QUEEN OF HEARTS” by Judy Duarte
Her high school reunion is coming up, and advice columnist Jenn Kramer couldn’t be dreading it more—until she lays eyes on Marcos. Jenn hardly noticed him when they were kids, but now he’s all grown up… and how deliciously he’s changed . . .

“THE HONEYMOON HOUSE” by Mary Carter
It doesn’t get more romantic than Andy Beck’s cottage on Martha’s Vineyard.  But love is the last thing on his mind—he just wants to get the cottage ready for his best friend’s honeymoon. At least that’s the plan, until he finds the gorgeous Maid of Honor ransacking his house—in the most irresistible way . . .

“THE MARRYING KIND” by Debbie Macomber
High school sweethearts Katie and Jason haven’t seen each other in ten years—and now she’s walked back into his life.  With one look, the love they shared comes flooding back—only now the odds seem stacked against them.  But when something’s meant to be, all bets are off . . .

CATHY LAMB lives in Oregon. She is married with three children. She writes late at night when it's just her and the moon and a few shooting stars.

JUDY DUARTE, the author of Mulberry Park, Entertaining Angels, The House on Sugar Plum Lane, and Christmas on Nutcracker Court, lives with her family in Southern California. Readers can visit her website at www.judyduarte.com.

MARY CARTER is a freelance writer and novelist. Her other works include Home with My Sisters, London from My Windows, Meet Me in Barcelona, Three Months in Florence, The Things I Do for You, My Sister’s Voice, Sunnyside Blues, She’ll Take It, and Accidentally Engaged. Readers are welcome to visit her at marycarterbooks.com, find her on Facebook, or follow her on Twitter @marycarterbooks.

DEBBIE MACOMBER, the author of Window on the Bay and Cottage by the Sea, has become a leading voice in women’s fiction worldwide. Her work has appeared on every major bestseller list, including those of The New York Times, USA Today, and Publishers Weekly. She is a multiple award winner, and there are more than 200 million copies of her books in print worldwide. Readers can visit her website at: www.debbiemacomber.com.
or support indie stores by buying on
Copyright © 2020 American Booksellers Association