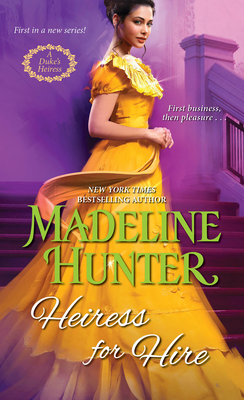 Minerva Hepplewhite has learned the hard way how to take care of herself. When an intruder breaks into her home, she doesn’t swoon or simper. Instead she wallops the rogue over the head and ties him up—only to realize he is Chase Radnor, a gentleman and grandson of a lord, and a man who makes it his business to investigate suspicious matters. Now he’s insisting that Minerva has inherited a fortune from his uncle, a wealthy duke. Only one thing could surprise her more: her sudden attraction to this exasperating man . . .

Chase can’t decide whether Minerva is a wronged woman or a femme fatale. Either way, he’s intrigued. Maddeningly, with her unexpected inheritance, she has set up a discreet detective business to rival Chase’s own. She may be the perfect person to help him uncover the truth about his uncle’s demise. But as proximity gives way to mutual seduction, Chase realizes he craves a much deeper alliance . . .

Praise For Heiress for Hire (A Duke's Heiress Romance)…

Praise for Heiress for Hire:

“At the heart of this smart, satisfying Regency romance—the first in a new trilogy from Hunter (Never Deny a Duke)—is the mystery of why a duke would bequeath a fortune to a woman he’d never met. Chase Radnor, gentleman investigator and nephew to the late duke, is instantly suspicious upon meeting newly minted heiress Minerva Hepplewhite. His eccentric uncle’s fall from a parapet looks like murder, and Minerva gained a great deal from his death. The self-reliant young widow also has a dark, secretive past that makes her a perfect suspect. To clear her name, Minerva begins her own investigation into the duke’s death, launching Hepplewhite’s Office of Discreet Inquiries, and she and Chase form an uneasy alliance as they first compete for, then begin to share, clues. Hunter gives the well-matched pair plenty of ground to cover with a wide cast of memorable suspects, and their clever detective work is a consistent pleasure. The plot moves apace, but Chase and Minerva’s relationship is treated patiently, with their attraction simmering alongside mutual respect, and their eventual love scenes are sensitively rendered. Romance readers craving substantive mystery and intelligent leads will savor this pitch-perfect love story.”
—Publishers Weekly STARRED REVIEW

"A superbly sexy love story deftly dovetailed with a well-crafted, mystery-spiked plot, and graced with a cast of endlessly amusing characters."
—Booklist

“An unexpected heiress finds love with the nephew of her benefactor as they both investigate the death that brought them together… Their banter is sharp and exciting.”
—Kirkus Reviews

Praise for the previous works of Madeline Hunter

“Fueled by an abundance of subtle wit and potent sensuality . . . an exquisitely crafted love story by one of the romance genre’s masters.”
—Booklist

“A rash, adventure seeking heroine and an honorable, take charge hero clash splendidly as passions blaze . . . to the delight of all concerned.”
—Library Journal

“Intelligent and memorable. . . .  With its tangy dialogue, Pride and Prejudice themes, bits of mystery and nefarious characters, readers may be reminded of Jane Austen.”
—RT Book Reviews (Top Pick)

“Hunter . . . spins the intrigues of an enterprising bastard son and a resourceful artist to delightful effect in this excellent launch.”
—Publishers Weekly (starred review)

“Stellar . . . hits all the literary marks. Hunter’s effortlessly elegant writing exudes a wicked sense of wit; her characterization is superbly subtle, and the sexual chemistry she cooks up between her deliciously independent heroine and delightfully sexy hero is pure passion.”
—Booklist (starred review)

Madeline Hunter is a New York Times bestselling author with more than six million copies of her books in print. She has thirty-one nationally bestselling historical romances in print, including most recently, Never Deny a Duke, A Devil of a Duke, and The Most Dangerous Duke in London. A member of RWA’s Honor Roll, she has won the RITA Award twice and been a finalist seven times. Her books have appeared on the bestseller lists of The New York Times, USA Today, and Publishers Weekly, and have been translated into thirteen languages. She has a PhD in art history, which she has taught at the university level.  Madeline loves to hear from her readers, and can be reached through her website at www.madelinehunter.com, on Facebook, www.facebook.com/madelinehunter/, and at twitter.com/madelinehunter.
Loading...
or support indie stores by buying on