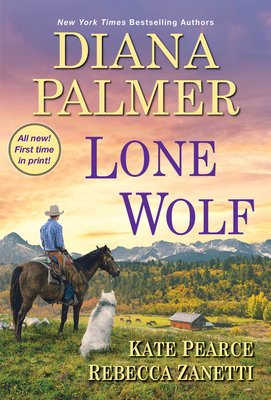 Headlined by western romance legend Diana Palmer, three celebrated New York Times bestselling authors combine their talents to celebrate the wildest version of man's best friend--the noble wolf. Each novella revolves around a rugged man and his trusty wolf protector as an opportunity for happily ever afters arise. Filled with sizzling tension and well-drawn characters--animal and human alike--this anthology is sure to resonate with readers looking to answer the call of the wild.

Loyal as a wolf--and just as strong and untamed--three solitary heroes are about to meet their perfect partners, in this thrilling collection from a trio of New York Times bestselling authors...

COLORADO COWBOY by DIANA PALMER
Fleeing her mother's killer, Esther Marist ends up at a rugged stranger's cabin. A wildlife rehabilitator with a menagerie that includes an elderly wolf, Matthews isn't the type to turn any creature away. As Esther heals, she realizes how much danger she's brought to his door--and how far he'll go to protect her.

THE WOLF ON HER DOORSTEP by KATE PEARCE
Beth Baker senses her grumpy summer tenant must be in trouble when his pet wolf shows up at her door, demanding she follow. Conner O'Neil, solitary and stubborn, doesn't want Beth's help--but only he can show her how to trust again.

RESCUE: COWBOY STYLE by REBECCA ZANETTI
Trent Logan has his ranch, his friends, and his wolf, and that's more than enough--until a shivering city girl runs into the Cattle Club to escape a Wyoming storm. Her eyes hold a world of secrets, and he'll have to face the demons of his own past in order to save them both.

The prolific author of over two hundred award-winning bestselling books, Diana Palmer got her start as a newspaper reporter. A multi-New York Times bestselling author and voted one of the top ten romance writers in America, she has a gift for telling the most sensual tales with charm and humor. Diana lives with her family in Cornelia, Georgia. Visit Diana at DianaPalmer.com

Rebecca Zanetti is the New York Times and USA Today bestselling author of over fifty romantic suspense, dark paranormal, and contemporary romances, many of which have also appeared on the Amazon, Barnes and Noble, and iBooks bestseller lists. She is a two-time RT Reviewers Choice Award-winner, the recipient of the RWA Daphne du Maurier Award, a ﬁve-time Daphne du Maurier Award-ﬁnalist, a PRISM Award-winner, and a two-time PRISM Award-ﬁnalist. Nearly a dozen of her novels have been selected as Amazon Best Romances of the Month, including Lethal Lies, Mercury Striking and Fallen, which were also Amazon Best Books of the Year. Zanetti has worked as an art curator, Senate aide, lawyer, college professor, and a hearing examiner--only to culminate it all in stories about alpha males and the women who claim them. Please visit her online at RebeccaZanetti.com.

Kate Pearce is a New York Times and USA Today bestselling author known for her unconventional heroes and her joy in subverting romance clichés. She was born and raised in England, but after acquiring a degree in history and barely escaping from the British Civil Service alive, she moved to California and then to Hawaii with her kids and her husband. A member of RWA, she writes novels in several genres for Kensington, Penguin Random House UK, Rouge Romance, Carina and Cleis Press. Along with being a voracious reader, Kate loves trail riding "Western style" with her family. She can be found online at KatePearce.com and on Twitter @Kate4queen.
Loading...
or support indie stores by buying on