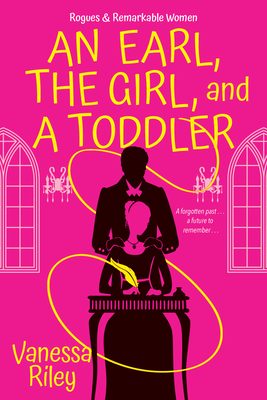 An Earl, the Girl, and a Toddler

A witty and moving story from the acclaimed author of A Duke, the Lady, and a Baby, about the lengths to which a woman will go for the love of her child…and the love of a man who knows her worth. Breaking with traditional Regency rules and customs, Vanessa Riley pens an unforgettable story perfect for fans of Julia Quinn’s Bridgerton, Evie Dunmore, and Eloisa James looking for something fresh and stirring!

"Get your fill of scandal, misunderstandings and a secret society to boot." - ELLE Canada

Masterminded by the ton's most clever countess, the secret society The Widow’s Grace helps ill-treated widows regain their reputations, their families, and even find true love again—or perhaps for the very first time . . .

Surviving a shipwreck en route to London from Jamaica was just the start of Jemina St. Maur's nightmare. Suffering from amnesia, she was separated from anyone who might know her, and imprisoned in Bedlam. She was freed only because barrister Daniel Thackery, Lord Ashbrook, was convinced to betray the one thing he holds dear: the law. Desperate to unearth her true identity, Jemina’s only chance is to purloin dangerous secrets with help from The Widow’s Grace—which means staying steps ahead of the formidable Daniel, no matter how strongly she is drawn to him . . .

Married only by proxy, now widowed by shipwreck, Daniel is determined to protect his little stepdaughter, Hope, from his family’s scandalous reputation. That’s why he has dedicated himself not just to the law, but to remaining as proper, upstanding—and boring—as can be. But the closer he becomes to the mysterious, alluring Jemina, the more Daniel is tempted to break the very rule of law to which he's deevoted his life. And as ruthless adversaries close in, will the truth require him, and Jemina, to sacrifice their one chance at happiness?


RAVES FOR A DUKE, A LADY, AND A BABY

Praise For An Earl, the Girl, and a Toddler: A Remarkable and Groundbreaking Multi-Cultural Regency Romance Novel (Rogues and Remarkable Women #2)…

Praise for An Earl, the Girl, and a Toddler

“Bridgerton fans, if you read just one book on this list, make sure it's Vanessa Riley's terrific An Earl, the Girl, and a Toddler.”
—Popsugar

“[An Earl, The Girl and a Toddler] brings the same elaborate storytelling and portrayal of a more diverse Regency world than is traditionally found. Riley’s commitment to writing the complex emotions of motherhood remains a crucial part of the series—also a welcome addition to the genre. Well-researched, with a fascinating author's note at the end, this story proves the first was no fluke. A historical romance of impressive heft.”
—Kirkus Reviews

“Riley offers powerful depictions of love, including the love of a father for a daughter, the love between friends, and most of all the love between two individuals who are meant for each together. Riley's extensive research into people of color during the Regency era adds greatly to the appeal of this page-turning romance. Fans of Shonda Rhimes’ adaptation of Julia Quinn’s Bridgerton books will devour this series.”
—Booklist STARRED REVIEW

“Daniel and Jemina’s interactions are filled with witty banter and innuendo, and the hero’s tender interactions with his daughter will make readers swoon. Move over, Bridgertons. There’s a new set of scandalous aristocrats waiting to take London society by storm.”
—Library Journal

“The amnesia trope is a challenging one to do convincingly, but Riley pulls it off with style…Readers craving a multicultural Regency will be pleased.”
—Publishers Weekly

Vanessa Riley is an award-winning author of Regency and Historical Romances featuring dazzling multi-culture communities and powerful persons of color. To fuel her interest in the Regency and early-Victorian eras, she made time for attending renaissance fairs and consuming period novels and films while obtaining her Ph.D. in mechanical engineering from Stanford University. She is a member of Romance Writers of America and the Historical Novel Society, as well as a Christian Book Lovers board member. A frequent speaker at women's events, she lives in Georgia with her military husband and teenage kid. Visit her online at VanessaRiley.com.
Loading...
or support indie stores by buying on