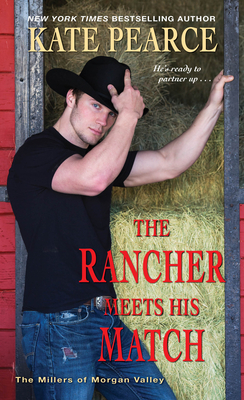 The Rancher Meets His Match (The Millers of Morgan Valley #4)

For the hardworking folks of Morgantown, home really is where the heart is. But sometimes it takes leaving for a while to figure that out. In New York Times bestselling author Kate Pearce's fourth Millers of Morgan Valley novel, Kaiden Miller uses his carpenter skills to renovate the a rundown neighboring ranch for the ailing owner, the father of his childhood nemesis, Julia Garcia. Can these two old foes ignore the sparks between them?

Kaiden Miller may be the family jokester, but he takes his work on their ranch very seriously. And as a sought-after master carpenter to boot, he's busier than ever. Still, when he's asked to renovate the neighboring ranch, he's more than willing. The owner, Juan Garcia, is ailing, and Kaiden expects to find the property pretty run down. He doesn't expect to find his old nemesis--Juan's daughter, Julia--overseeing his work...

Julia's not sure why Kaiden never liked her. But if working with him makes life easier for her father, so be it. Yet to her surprise, not only is Kaiden great with her father, he's great with her too. As the weeks pass, it becomes harder to ignore their simmering attraction. And when Julia's boss turns up with a sweet deal, both she and Kaiden will have to decide where their loyalties--and their hearts--lie...

New York Times and USA Today bestselling author Kate Pearce was born in England in the middle of a large family of girls and quickly found that her imagination was far more interesting than real life. After acquiring a degree in history and barely escaping from the British civil service alive, she moved to California and then to Hawaii with her kids and her husband and set about reinventing herself as a romance writer. She writes for Kensington, Penguin Random House UK, Rouge Romance, Carina and Cleis Press and is known for both her unconventional heroes and her joy at subverting romance clichés. In her spare time she self-publishes science fiction erotic romance, historical romance, and whatever else she can imagine. You can find Kate at her website at katepearce.com, on Facebook as Kate Pearce, and on Twitter @Kate4queen.
Loading...
or support indie stores by buying on