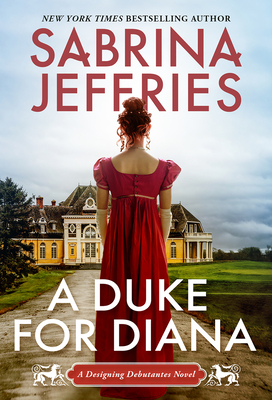 A Duke for Diana

From the beloved New York Times bestselling author comes a dazzling new series perfect for fans of Bridgerton, featuring a talk-of-the-ton trio of young women who’ve eschewed working as governesses to utilize their talents for fashion, food, and music, by running their own party planning enterprise, Elegant Occasions. And if they, and their wealthy clients, happen to find love along the way, it just makes their efforts all the more rewarding…

Self-made civil engineer Geoffrey Brookhouse has unexpectedly inherited the dukedom of Grenwood. But he has a secret that could ruin his family. Hoping to save his timid sister from that fate, he seeks to marry her off to a respectable, protective gentleman. With the London Season imminent, Geoffrey hires Elegant Occasions to orchestrate her debut. Yet Lady Diana Harper, spirited fashion expert, proves more than he bargained for. Suddenly, Geoffrey’s sister is emerging from her shell, and he is beleaguered with social invitations and gossip! Worse, Diana is attempting to transform him into a presentable duke—when all he really wants is to make her his own . . .

Diana doesn’t know what to make of the handsome, disheveled duke. The man bristles at the very idea that his fashion faux pas might spoil his sister’s chances. Yet Geoffrey’s stubbornness simply inspires Diana to ruffle his feathers—by setting him on a course of self-improvement. Although there’s something endearing, even irresistible about his flaws, can a man who hates the ton tolerate a woman who makes her living catering to them? Little does either know that they have more in common than they suspect—and that two can create a society all their own . . .

Sabrina Jeffries is the New York Times bestselling author of more than fifty novels and works of short fiction (some written under the pseudonyms Deborah Martin and Deborah Nicholas). Her writing has been published in more than twenty-one languages and there are over nine million copies of her books in print. A four-time RITA® Award-finalist, Jeffries has won the Holt Medallion Award, the Maggie, and the Booksellers' Best Award. After earning her Ph.D. in English Literature from Tulane University, she chose writing over academics, and now her sexy and humorous historical romances routinely land on the New York Times and USA Today bestseller lists. Sabrina lives in North Carolina with her husband and adult son, who has inspired her to actively champion the cause of autistic children. Visit her online at SabrinaJeffries.com.
Loading...
or support indie stores by buying on