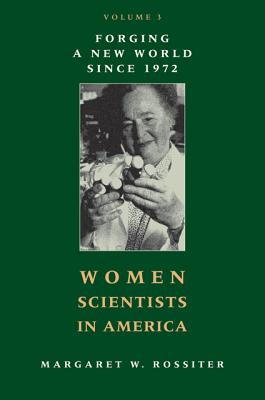 Forging a New World Since 1972

The third volume of Margaret W. Rossiter's landmark survey of the history of American women scientists focuses on their pioneering efforts and contributions from 1972 to the present. Central to this story are the struggles and successes of women scientists in the era of affirmative action. Scores of previously isolated women scientists were suddenly energized to do things they had rarely, if ever, done before--form organizations and recruit new members, start rosters and projects, put out newsletters, confront authorities, and even fight (and win) lawsuits. Rossiter follows the major activities of these groups in several fields--from engineering to the physical, biological, and social sciences--and their campaigns to raise consciousness, see legislation enforced, lobby for passage of the Equal Rights Amendment, and serve as watchdogs of the media. This comprehensive volume also covers the changing employment circumstances in the federal government, academia, industry, and the nonprofit sector and discusses contemporary battles to increase the number of women members of the National Academy of Science and women presidents of scientific societies.

In writing this book, Rossiter mined nearly one hundred previously unexamined archival collections and more than fifty oral histories. With the thoroughness and resourcefulness that characterize the earlier volumes, she recounts the rich history of the courageous and resolute women determined to realize their scientific ambitions.

Margaret W. Rossiter is the Marie Underhill Noll Professor of the History of Science at Cornell University and former editor of Isis and Osiris. Her prize-winning books Women Scientists in America: Struggles and Strategies to 1940 and Women Scientists in America: Before Affirmative Action, 1940-1972 are also published by Johns Hopkins. Professor Rossiter was a MacArthur Fellow from 1989 until 1994.
Loading...
or
Not Currently Available for Direct Purchase