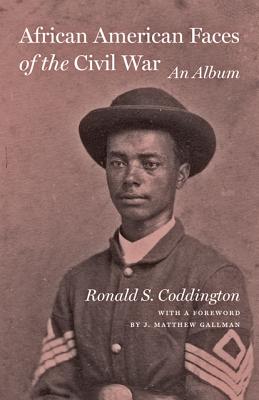 Discover the men of color who fought for their freedom during the Civil War through profiles illustrated with original wartime photographs.

A renowned collector of Civil War photographs and a prodigious researcher, Ronald S. Coddington combines compelling archival images with biographical stories that reveal the human side of the war. This third volume in his series on Civil War soldiers contains previously unpublished photographs of African American Civil War participants--many of whom fought to secure their freedom.

Coddington discovers these portraits--cartes de visite, ambrotypes, and tintypes--in museums, archives, and private collections. He has pieced together each individual's life and fate based upon personal documents, military records, and pension files. These stories tell of ordinary men who became fighters, of the prejudice they faced, and of the challenges they endured. African American Faces of the Civil War makes an important contribution to a comparatively understudied aspect of the war and provides a fascinating look into lives that helped shape America.

Ronald S. Coddington is assistant managing editor at The Chronicle of Higher Education. His work has appeared in USA Today, The Atlanta Journal-Constitution, and the San Jose Mercury News. He is a contributing writer to the New York Times Disunion series and writes a monthly column for The Civil War News. He is the author of Faces of the Confederacy and Faces of the Civil War, both published by Johns Hopkins.
Loading...
or
Not Currently Available for Direct Purchase