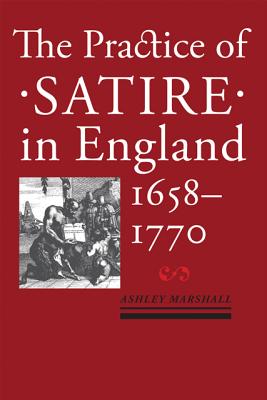 An exhaustive study of satire in the long eighteenth century.

In The Practice of Satire in England, 1658-1770, Ashley Marshall explores how satire was conceived and understood by writers and readers of the period. Her account is based on a reading of some 3,000 works, ranging from one-page squibs to novels. The objective is not to recuperate particular minor works but to recover the satiric milieu--to resituate the masterpieces amid the hundreds of other works alongside which they were originally written and read.

The long eighteenth century is generally hailed as the great age of satire, and as such, it has received much critical attention. However, scholars have focused almost exclusively on a small number of canonical works, such as Gulliver's Travels and The Dunciad, and have not looked for continuity over time. Marshall revises the standard account of eighteenth-century satire, revealing it to be messy, confused, and discontinuous, exhibiting radical and rapid changes over time. The true history of satire in its great age is not a history at all. Rather, it is a collection of episodic little histories.

Ashley Marshall is an associate professor of English at the University of Nevada, Reno. She is the author of Swift and History: Politics and the English Past
Loading...
or
Not Currently Available for Direct Purchase