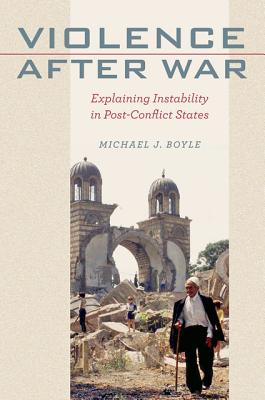 The end of one war is frequently the beginning of another because the cessation of conflict produces two new challenges: a contest between the winners and losers over the terms of peace, and a battle within the winning party over the spoils of war. As the victors and the vanquished struggle to establish a new political order, incidents of low-level violence frequently occur and can escalate into an unstable peace or renewed conflict. Michael J. Boyle evaluates the dynamics of post-conflict violence and their consequences in Violence after War.

In each of the case studies, Boyle traces multiple pathways through which violence emerges in post-conflict states and highlights how the fragmentation of combatants, especially rebel groups, produces unexpected and sometimes surprising shifts in the nature, type, and targets of attack. His case studies are based on unpublished data on violent crime, including some from fieldwork in Kosovo, East Timor, and Bosnia, and a thorough review of narrative and witness accounts of the attacks. The case study of Iraq comes from data that Boyle obtained directly from U.S. Central Command, published here for the first time.

Violence after War will be essential reading for all those interested in political violence, peacekeeping, and post-conflict reconstruction.

Michael J. Boyle is an assistant professor of political science at La Salle University and a regular contributor to the Guardian newspaper. He has published widely on terrorism, insurgency, and political violence.
or
Not Currently Available for Direct Purchase
Copyright © 2020 American Booksellers Association