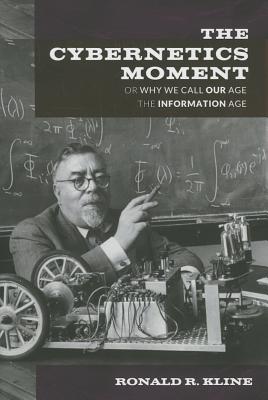 How did cybernetics and information theory arise, and how did they come to dominate fields as diverse as engineering, biology, and the social sciences?

Winner of the CHOICE Outstanding Academic Title of the Choice ACRL

Cybernetics--the science of communication and control as it applies to machines and to humans--originates from efforts during World War II to build automatic antiaircraft systems. Following the war, this science extended beyond military needs to examine all systems that rely on information and feedback, from the level of the cell to that of society. In The Cybernetics Moment, Ronald R. Kline, a senior historian of technology, examines the intellectual and cultural history of cybernetics and information theory, whose language of "information," "feedback," and "control" transformed the idiom of the sciences, hastened the development of information technologies, and laid the conceptual foundation for what we now call the Information Age.

Kline argues that, for about twenty years after 1950, the growth of cybernetics and information theory and ever-more-powerful computers produced a utopian information narrative--an enthusiasm for information science that influenced natural scientists, social scientists, engineers, humanists, policymakers, public intellectuals, and journalists, all of whom struggled to come to grips with new relationships between humans and intelligent machines.

Kline traces the relationship between the invention of computers and communication systems and the rise, decline, and transformation of cybernetics by analyzing the lives and work of such notables as Norbert Wiener, Claude Shannon, Warren McCulloch, Margaret Mead, Gregory Bateson, and Herbert Simon. Ultimately, he reveals the crucial role played by the cybernetics moment--when cybernetics and information theory were seen as universal sciences--in setting the stage for our current preoccupation with information technologies.

Ronald R. Kline is the Bovay Professor in History and Ethics of Engineering at Cornell University. He is the author of Steinmetz: Engineer and Socialist and Consumers in the Country: Technology and Social Change in Rural America.
Loading...
or
Not Currently Available for Direct Purchase