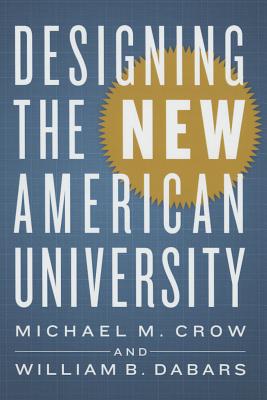 America's research universities consistently dominate global rankings but may be entrenched in a model that no longer accomplishes their purposes. With their multiple roles of discovery, teaching, and public service, these institutions represent the gold standard in American higher education, but their evolution since the nineteenth century has been only incremental. The need for a new and complementary model that offers broader accessibility to an academic platform underpinned by knowledge production is critical to our well-being and economic competitiveness.

Michael M. Crow, president of Arizona State University and an outspoken advocate for reinventing the public research university, conceived the New American University model when he moved from Columbia University to Arizona State in 2002. Following a comprehensive reconceptualization spanning more than a decade, ASU has emerged as an international academic and research powerhouse that serves as the foundational prototype for the new model. Crow has led the transformation of ASU into an egalitarian institution committed to academic excellence, inclusiveness to a broad demographic, and maximum societal impact.

In Designing the New American University, Crow and coauthor William B. Dabars--a historian whose research focus is the American research university--examine the emergence of this set of institutions and the imperative for the new model, the tenets of which may be adapted by colleges and universities, both public and private. Through institutional innovation, say Crow and Dabars, universities are apt to realize unique and differentiated identities, which maximize their potential to generate the ideas, products, and processes that impact quality of life, standard of living, and national economic competitiveness. Designing the New American University will ignite a national discussion about the future evolution of the American research university.

Michael M. Crow has served as the president of Arizona State University since 2002. He was formerly executive vice provost at Columbia University and a professor of science and technology policy. William B. Dabars is senior director of research for the New American University in the Office of the President and an associate research professor in the School for the Future of Innovation in Society at Arizona State University.
Loading...
or support indie stores by buying on