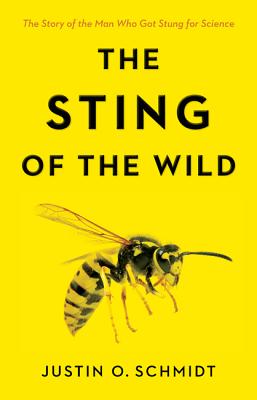 The Sting of the Wild

The "King of Sting" describes his adventures with insects and the pain scale that's made him a scientific celebrity.

Entomologist Justin O. Schmidt is on a mission. Some say it's a brave exploration, others shake their heads in disbelief. His goal? To compare the impacts of stinging insects on humans, mainly using himself as the test case.

In The Sting of the Wild, the colorful Dr. Schmidt takes us on a journey inside the lives of stinging insects. He explains how and why they attack and reveals the powerful punch they can deliver with a small venom gland and a "sting," the name for the apparatus that delivers the venom. We learn which insects are the worst to encounter and why some are barely worth considering.

The Sting of the Wild includes the complete Schmidt Sting Pain Index, published here for the first time. In addition to a numerical ranking of the agony of each of the eighty-three stings he's sampled so far, Schmidt describes them in prose worthy of a professional wine critic: "Looks deceive. Rich and full-bodied in appearance, but flavorless" and "Pure, intense, brilliant pain. Like walking over flaming charcoal with a three-inch nail embedded in your heel."

Schmidt explains that, for some insects, stinging is used for hunting: small wasps, for example, can paralyze huge caterpillars for long enough to lay eggs inside them, so that their larvae emerge within a living feast. Others are used to kill competing insects, even members of their own species. Humans usually experience stings as defensive maneuvers used by insects to protect their nest mates. With colorful descriptions of each venom's sensation and a story that leaves you tingling with awe, The Sting of the Wild's one-of-a-kind style will fire your imagination.

Justin O. Schmidt is a biologist at the Southwestern Biological Institute and is associated with the Department of Entomology at the University of Arizona. He is the coeditor of Insect Defenses: Adaptive Mechanisms and Strategies of Prey and Predators.