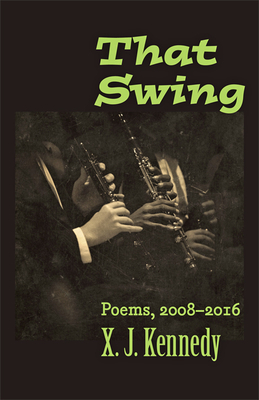 In this, his ninth book of poetry, lyric master X. J. Kennedy regales his readers with engaging rhythm fittingly signaled by the book's title, which echoes Duke Ellington's jazz classic "It Don't Mean a Thing (If It Ain't Got That Swing)." Kennedy's poems, infused with verve and surprise, are by turns irresistibly funny and sharply insightful about life in America.

Some poems are personal recollections of childhood and growing up, as in "My Mother Consigns to the Flames My Trove of Comic Books." "Thomas Hardy's Obsequies" tells the bizarre true account of the literary giant's burial. Other poems portray memorable characters, from Jane Austen ("Jane Austen Drives to Alton in Her Donkey Trap") to a giant land tortoise ("Lonesome George") to a slow-witted man hired to cook for a nudist colony ("Pudge Wescott"). Kennedy is a storyteller of the first order, relating tales of travel to far-reaching places, from the Gal pagos Islands and Tiananmen Square to the hectic back streets of Bamako, Mali. This wise and clever book is rounded out with adept translations of work by Charles Baudelaire, St phane Mallarm , Arthur Rimbaud, and others.

X. J. Kennedy has written nine collections of poetry, among them In a Prominent Bar in Secaucus: New and Selected Poems, 1955-2007 and Fits of Concision: Collected Poems of Six or Fewer Lines. The coeditor, with Dana Gioia, of An Introduction to Poetry, he has been the recipient of numerous awards, including the Poets' Prize, the Robert Frost Medal, the Los Angeles Times Book Prize, the Aiken-Taylor Award, and the Jackson Poetry Prize.
Loading...
or
Not Currently Available for Direct Purchase