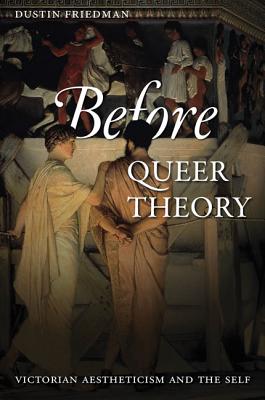 Victorian Aestheticism and the Self

Late Victorian aesthetes were dedicated to the belief that an artwork's value derived solely from its beauty, rather than any moral or utilitarian purpose. Works by these queer artists have rarely been taken seriously as contributions to the theories of sexuality or aesthetics. But in Before Queer Theory, Dustin Friedman argues that aestheticism deploys its "art for art's sake" rhetoric to establish a nascent sense of sexual identity and community.

Friedman makes the case for a claim rarely articulated in either Victorian or modern culture: that intellectually, creatively, and ethically, being queer can be an advantage not in spite but because of social hostility toward nonnormative desires. Showing how aesthetes--among them Walter Pater, Oscar Wilde, Vernon Lee, and Michael Field--harnessed the force that Georg Wilhelm Friedrich Hegel called "the negative," Friedman reveals how becoming self-aware of one's sexuality through art can be both liberating and affirming of humanity's capacity for subjective autonomy.

Challenging one of the central precepts of modern queer theory--the notion that the heroic subject of Enlightenment thought is merely an effect of discourse and power--Friedman develops a new framework for understanding the relationship between desire and self-determination. He also articulates an innovative, queer notion of subjective autonomy that encourages reflecting critically on one's historical moment and envisioning new modes of seeing, thinking, and living that expand the boundaries of social and intellectual structures. Before Queer Theory is an audacious reimagining that will appeal to scholars with interests in Victorian studies, queer theory, gender and sexuality studies, and art history.

Dustin Friedman is an assistant professor in the Department of Literature at American University.
or
Buy Here
Copyright © 2020 American Booksellers Association