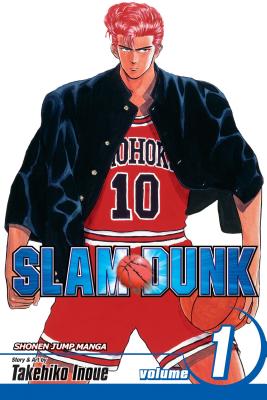 Takehiko Inoue's legendary beloved basketball manga is finally here and the tale of a lifetime is in your hands.

Hanamichi Sakuragi's got no game with girls--none at all! It doesn't help that he's known for throwing down at a moment's notice and always coming out on top. A hopeless bruiser, he's been rejected by 50 girls in a row! All that changes when he meets the girl of his dreams, Haruko, and she's actually not afraid of him! When she introduces him to the game of basketball, his life is changed forever...

Takehiko Inoue is the creator of one of the most popular manga of all time, Slam Dunk, which has sold over 100 million copies worldwide. He followed that series up with two titles lauded by critics and fans alike—Vagabond, a fictional account of the life of Miyamoto Musashi, and Real, a manga about wheelchair basketball. Inoue is the recipient of numerous awards, including the prestigious Tezuka Osamu Culture Award and the Media Arts Festival Award. In addition to his work on manga, Inoue has worked on television commercials, character designs for video games, and is the founder of a scholarship to foster Japanese basketball talent.
Loading...
or support indie stores by buying on
(This book is on backorder)