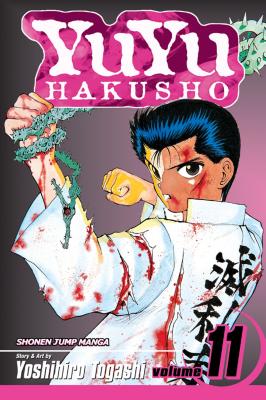 A delinquent’s gotta do what he’s gotta do…in the afterlife.

Yusuke Urameshi was a tough teen delinquent until one selfless act changed his life...by ending it. When he died saving a little kid from a speeding car, the afterlife didn't know what to do with him, so it gave him a second chance at life. Now, Yusuke is a ghost with a mission, performing good deeds at the behest of Botan, the ferrywoman of the River Styx, and Koenma, the pacifier-sucking judge of the dead.

The Dark Tournament is finally down to the wire. After a long trail of brutal bloodshed, the stage has been set for the ultimate showdown between Team Urameshi and Team Toguro. And now that Kurama can transform into a fox demon at will by drinking the potion from the Seed of De-Incarnation--a lovely parting gift from Suzuki, The Beautiful Fighter--his ferocious plants have been given a much-needed energy boost.

Meanwhile, Sakyo reveals that his grand plan is to create a path between the demon plane and the human world, allowing powerful demons to come through and wreak havoc in the human realm. Could this be the beginning of the end for humans...?

Yoshihiro Togashi's manga career began in 1986 at the age of 20, when he won the coveted Osamu Tezuka Award for new manga artists. He debuted in the Japanese Weekly Shonen Jump magazine in 1989 with the romantic comedy Tende ShÃ´waru Cupid. From 1990 to 1994 he wrote and drew the hit manga YuYu Hakusho, which was followed by the dark comedy science-fiction series Level E and the adventure series Hunter x Hunter. In 1999 he married the manga artist Naoko Takeuchi.
or
Not Currently Available for Direct Purchase