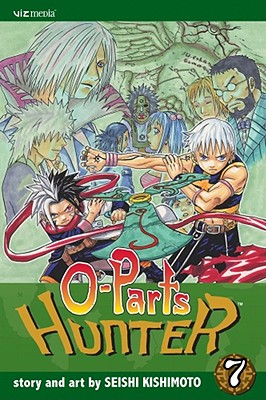 Ruby's dream: to become a famous treasure hunter. Jio's dream: to rule the world In a not too distant future, mankind battles over O-Parts, powerful relics from an ancient civilization. Jio is a young boy with a tragic past who only trusts one thing in the world: money. Little does he suspect that he is also a very powerful O-Parts Tactician (O.P.T.), and inside him sleeps a demon of incredible ferocity. With his partner, Ruby, Jio embarks on a dangerous quest to acquire as many O-Parts as he can. Now that peace has returned to Entotsu City, Jio, Ruby and Ball strike out for the Dastom Ruins where they are told to search for a man named Wick--but the revelations Wick is about to share with them will be anything but easy to swallow. Is it true that O-Parts are originally from another planet far, far away? And is Jio now strong enough to survive his next run-in with the ruthless Zenom Syndicate?