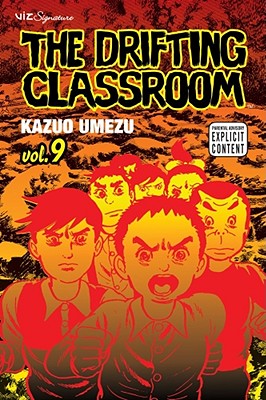 Pursued by grotesque mutants, Sho and his friends flee back to the school, where more horrors await Barricaded against the nightmares outside, the students must perform an emergency medical operation under the most primitive of conditions. As the survivors' resources dwindle, the countdown draws closer and closer to the end...

Kazuo Umezu was born September 3, 1936 in Wakayama, Japan. Umezu, who started drawing professionally in the 1950s, is considered the most influential horror manga artist ever. His many horror and sci-fi/horror works include Nekome Kozo ("The Cat-Eyed Kid," 1967-1968), Orochi, The Drifting Classroom (1972-1974), Ultraman (a manga adaptation of the TV series), Senrei ("Baptism"), My Name is Shingo, The Left Hand of God/Right Hand of the Devil, and Fourteen. His popular gag series Makoto-Chan (1976) and Again prove that Umezu is also an accomplished humor cartoonist. (He is also a musician.) Umezu's weird style, incredible ideas and sometimes terrifying imagery have made him a fixture of Japanese pop culture, and his work has been adapted into movies, anime and collectibles.
or
Buy Here
Copyright © 2020 American Booksellers Association