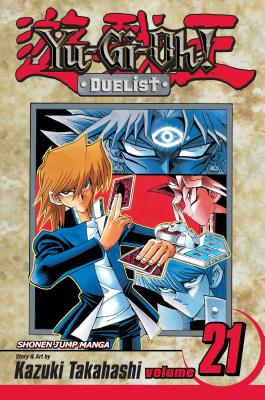 In the second saga of the Yu-Gi-Oh epic, Duel Monsters is the world's most popular collectible card game-but to Yugi, it's the most dangerous game of all Entering the Duel Monsters world championship, Yugi fights ruthless opponents like game designer Maximillion Pegasus and teenage multimillionaire Kaiba Seto, hoping to discover the origin of the game...and his own powers Contains the original storyline of the first season of Yu-Gi-Oh , including scenes too startling for TV Only four duelists remain in the running On the Tower of Alcatraz, Jonouchi faces Marik, the evil Egyptian duelist whose grudge has smoldered for three thousand years. But can Jonouchi fight while he's trapped in a steel cage surrounded by molten lava? And can he overcome the power of Marik's Egyptian God Card, the Sun Dragon Ra? If he wins, he'll get his dream of facing Yugi in the finals. But if he loses, he'll get a one-way ticket to the grave.