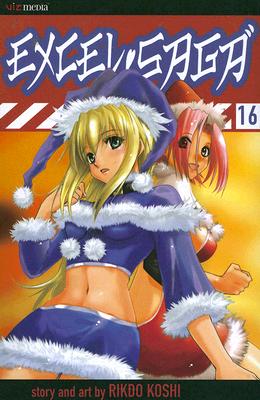 Stories the director himself said they didn't dare put in the anime Q: What happens when you try to act like an anime character in real life? A: EXCEL SAGA. Two groups of neighbors in an apartment building lead secret lives. One thinks they're trying to take over the city of Fukuoka. The other thinks they're trying to defend it. Only their bosses, would-be conqueror Lord Il Palazzo and obsessed bureaucrat Dr. Kabapu, know the truth behind this increasingly dangerous private game... Too bad neither will let their underlings in on it Dr. Kabapu be ILLin', as the stunning success of Il Palazzo's eponymous electronics firm is turning him literally sick. But even while ILL's president--the stylish, corporate Excel--carries out her CEO's directives, kindhearted Umi discovers another version of her: a woman in a torn prison outfit with little memory of her past. Dressing the stranger from her extensive cos-play wardrobe, Umi brings the mystery girl into the Shiouji household, only to let her fall into Aunt Miwa's clutches. And that's not a figure of speech.

Rikdo Koshi's Excel Saga was the creator's first professional effort and made its debut in 1997. He is also the author of Holy Brownie, published through Shonen Gahosha, and Arahabaki, published in Shueisha's Ultra Jump. He lives in Fukuoka, Japan.
or support indie stores by buying on