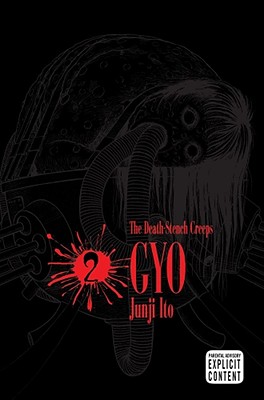 Horror under the waves; The Stench of the Sea... & Horror by the Seaside... Something is rotten in Okinawa...the floating stench of death hangs over the island..What is it? A strange, legged fish appears on the scene...so begins Tadashi and Kaori's spiral into the horror (and stench) of the sea. Here is the long-awaited new horror manga series from the Eisner-nominated creator of Uzumaki, Junji Ito. The Horrifying Conclusion... Trapped on an island filled with the stench of mutating bodies, can teenager Tadashi save his girlfriend from a fate worse than death? Or will the cure prove worse than the disease? Hold your breath until all is revealed--along with the final stinking secrets of the "walking fish of Okinawa.

Junji Ito made his professional manga debut in 1987 and since then has gone on to be recognized as one of the greatest contemporary artists working in the horror genre. His titles include Tomie and Uzumaki, which have been adapted into live-action films; Gyo, which was adapted into an animated film; and his short story collections Fragments of Horror, Shiver and Frankenstein, all of which are available from VIZ Media. Ito's influences include classic horror manga artists Kazuo Umezu and Hideshi Hino, as well as authors Yasutaka Tsutsui and H.P. Lovecraft.
or
Not Currently Available for Direct Purchase