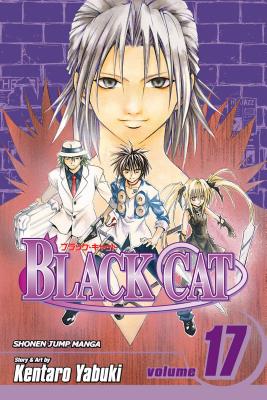 Train Heartnet, also known as "Black Cat," was an infamous assassin for a secret organization called Chronos...until he abandoned that cold-blooded existence to live on his own terms as an easygoing bounty hunter. But is Train's past as far behind him as he thinks?

The final stage of the battle begins! Now that Train and the Sweepers have reached Creed’s hideout, there is no turning back. But for Train, it’s not about avenging Saya’s death anymore. He is risking his life to capture Creed as a member of the Sweeper Alliance.

Kentaro Yabuki made his manga debut with Yamato Gensouki, a short series about a young empress destined to unite the warring states of ancient Japan and the boy sworn to protect her. His next series, Black Cat, commenced serialization in the pages of Weekly Shonen Jump in 2000 and quickly developed a loyal fan following. Black Cat has also become an animated TV series, first hitting Japan's airwaves in the fall of 2005.
Loading...
or support indie stores by buying on