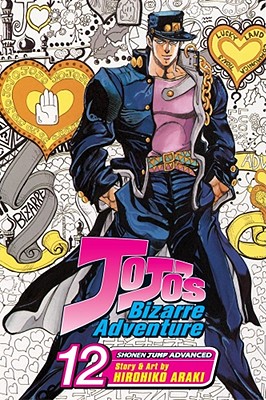 The magic book of Mondatta has shown the future: Jotaro with a bullet through his head! Can he escape his fate?! As the heroes race against time to find Dio's secret lair, Iggi, the dog, is the first to discover the location. But Dio's guardian, a hawk with the power of an Egyptian god, will kill anything…and anyone...who threatens his master. It's the ultimate superpowered dog vs. bird battle!

Hirohiko Araki made his manga debut in 1981 with the Wild West story Busô Poker. He experimented with several genres, including mystery (Mashonen B.T.) and action-horror (Baoh), before beginning JoJo’s Bizarre Adventure in 1986. Propelled by imaginative storylines, weird imagery and individualistic artwork, JoJo’s Bizarre Adventure is one of the longest-running and most popular shonen manga ever. Araki’s current works include a new series set in the JoJo universe, JoJolion.
or support indie stores by buying on
Copyright © 2020 American Booksellers Association