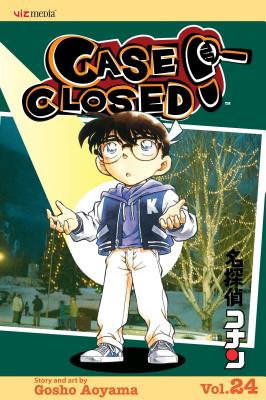 • An ongoing series in Japan—over 54 volumes released to date, with over 84 million copies sold!
• Case Closed manga has sold over 185k units in the US to date!
• One of the best-selling titles from the pages of Japan’s manga magazine Shonen Sunday
• Winner of the Shogakukan Award for Best Manga in 2001
• Named one of the Top 50 Manga Properties of 2005 by ICv2
• Anime is currently available on DVD from FUNimation
• Merchandise across categories in North America: accessories, calendars, TCG, etc.

When ace high school detective Jimmy Kudo is fed a mysterious substance by a pair of nefarious men in black--poof! He is physically tranformed into a first grader. Until Jimmy can find a cure for his miniature malady, he takes on the pseudonym Conan Edogawa and continues to solve all the cases that come his way.

Usually, Conan's mind is focused on detective work. But when Rachel falls for a handsome young doctor at a crime scene, suddenly the pint-size detective can't concentrate on the case... As Rachel threatens to give up on the perennially unavailable Jimmy Kudo, Conan starts to harbor murderous thoughts of his own... Then the Syndicate returns! At a glittering holiday ball, Conan and Anita face the shady organization that turned them into kids. But the game changes forever when one of them transforms back to the right age!

Gosho Aoyama, made his debut in 1992 with CHOTTO MATTE ("Wait a minute") which won Shogakukan's prestigious Shinjin Comic Taisho ("Newcomer's Award for Comics") and launched his career as a critically acclaimed, top-selling manga artist. In addition to DETECTIVE CONAN which won the Shogakukan Award for best Manga in 2001, Aoyama created the popular manga, YAIBA, which won Shogakukan's Award for Manga in 1992. Aoyama's manga is greatly influenced by his boyhood love for mystery, adventure, and baseball and he has cited the tales of Arsene Lupin, Sherlock Holmes, and the samurai films of Akira Kurosawa as some of his childhood favorites.
or
Not Currently Available for Direct Purchase
Copyright © 2020 American Booksellers Association