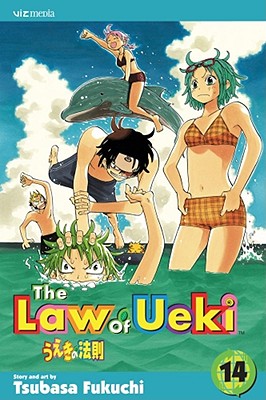 Fierce battle competition, comedy, and an epic coming-of-age story--somehow Kosuke Ueki manages to remain true to himself through it all.

A group of powerful beings called tenkaijin are holding a special tournament. The rules of the game--each tenkaijin selects a kid in junior high to be his champion and grants him a special power. The kids take each other on in heated battle, but if they hurt innocent bystanders, then they lose one of their natural-given abilities. Every time they win a battle, they gain a new ability. The ultimate winner of the tournament is granted any power of his choosing, and the tenkajin who he represents succeeds in becoming the next god. Kosuke Ueki has been chosen to fight in the tournament. His special power--the ability to turn garbage into trees.

The long-awaited moment has arrived: at last, Mori has finally figured out what her power is! Too bad it's not very useful in battle. Can Mori and her new power take on Memory, tactical genius and master of traps? If Ueki and his friends survive this round, they'll have to face Team Capucho--and a sneak attack from the ruthless Hanon!

Tsubasa Fukuchi was born and raised in Tochigi Prefecture. When he was 18, his first-ever manga submission was selected as a commendable work in January 1999 for the Shonen Sunday Manga College Awards.
Loading...
or
Not Currently Available for Direct Purchase