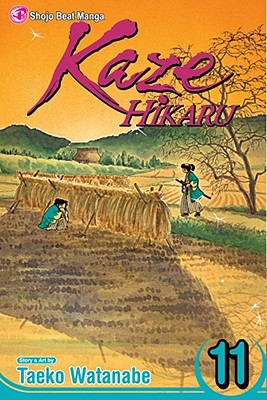 Romance between swordsmen, based on a true-life adventure of a young girl determined to be a part of history. In the 1860s in Japan, a new era is dawning. During this time fraught with violent social upheaval, samurai of all walks of life flock to Kyoto in the hope of joining a band of warriors united around their undying loyalty to the shogunate system. This group becames one of the greatest (and most infamous) movements in Japanese history...the Shinsengumi Yamanami learns that the path of righteousness and justice is not as straight and clear as he thought when he receives conflicting requests for allegiance. Ito asks Yamanami to show mercy for his friends in the Tenguto, who support the emperor, while Kondo insists that they be dealt with as enemies of the shogun. With lives at stake, will Yamanami be able to balance justice, loyalty and honor?

Taeko Watanabe debuted as a manga artist in 1979 with her story Waka-chan no Netsuai Jidai (Love Struck Days of Waka). Kaze Hikaru is her longest-running series, but she has created a number of other popular series. Watanabe is a two-time winner of the prestigious Shogakukan Manga Award in the girls' category--her manga Hajime-chan go Ichiban! (Hajime-chan Is Number One!) claimed the award in 1991, and Kaze Hikaru took it in 2003. Watanabe read hundreds of historical sources to create Kaze Hikaru. She is from Tokyo.
Loading...
or
Not Currently Available for Direct Purchase