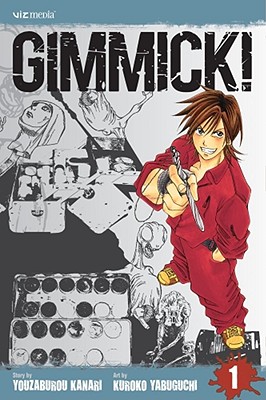 - As of Volume 8 of the Japanese version, there are 300,000 copies of Gimmick in print (in Japan).
- Detailed information and insight on movie makeup and special effects.
- Will appeal to fans of the CSI: Crime Scene Investigation genre.
- Gimmick is licensed in Taiwan, Hong Kong and Korea. Kohei Nagase, a genius when it comes to makeup and special effects. He uses his skills to expertly disguise people from the press, criminals, or anyone wanting to do them harm. Things get rolling for Kohei and his stuntman sidekick Shingo when a sexy young starlet asks for their help in ditching her sleazy manager. Later, Kohei is commissioned to replace some zombies at a local horror theme park, but can he also prevent a disgruntled make-up artist from blowing the attraction sky high? And an actress whose reputation was sidelined by an accident that left her body scarred hopes Kohei can get her career back on track.

Kanari has written many manga stories, including the mystery series Kindaichi Case Files and the school horror series Uroborosu no Wa. His previous series, Mystery Minzoku Gakusha Yakumoitsuki, is well known in Japan and was even made into a live action television drama.
or
Not Currently Available for Direct Purchase
Copyright © 2020 American Booksellers Association