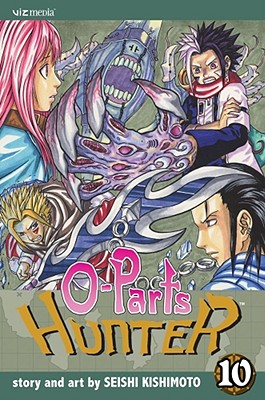 Ruby's dream: to become a famous treasure hunter. Jio's dream: to rule the world In a not too distant future, mankind battles over O-Parts, powerful relics from an ancient civilization. Jio is a young boy with a tragic past who only trusts one thing in the world: money. Little does he suspect that he is also a very powerful O-Parts Tactician (O.P.T.), and inside him sleeps a demon of incredible ferocity. With his partner, Ruby, Jio embarks on a dangerous quest to acquire as many O-Parts as he can. Yuria's battle with Python Jack continues, and Python Jack seems to have the upper hand. But Yuria has a trick up her sleeve. Unfortunately, she may need to give up her soul to use it... Meanwhile, Jio bumps into a childhood friend--and some unpleasant memories--he thought he'd never see again. Have the demons of the past been laid to rest, or is there still bad blood between the two?