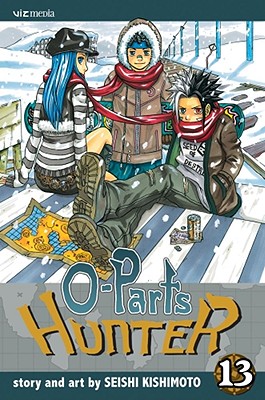 Ruby's dream: to become a famous treasure hunter. Jio's dream: to rule the world In a not too distant future, mankind battles over O-Parts, powerful relics from an ancient civilization. Jio is a young boy with a tragic past who only trusts one thing in the world: money. Little does he suspect that he is also a very powerful O-Parts Tactician (O.P.T.), and inside him sleeps a demon of incredible ferocity. With his partner, Ruby, Jio embarks on a dangerous quest to acquire as many O-Parts as he can. As the Olympia tournament continues, Jio squares off against Ikaros to save Ruby. It seems like a fair fight, but Ikaros is not what he seems. Will Jio be able to handle Ikaros's true form? Meanwhile, the Zenom Syndicate moves closer to completing the Reverse Kabbalah...and Cross arrives at Olympia to take his final revenge against Satan.